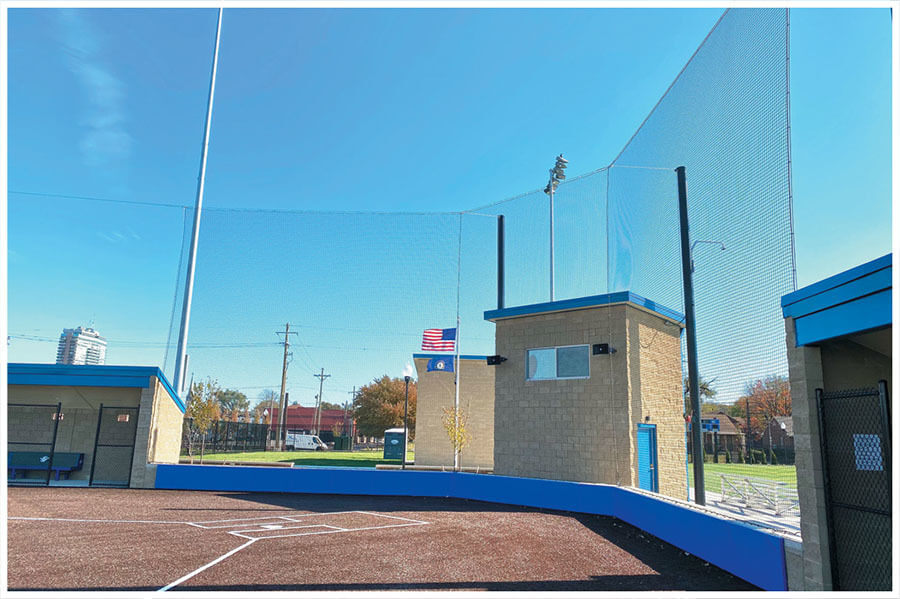 On a spring afternoon, the roar of rush hour is split by the crack of a baseball bat, and the ball soars away from home plate. The crowd of cheering high school kids is on its feet as the ball sails over the outfield and heads towards a street full of speeding cars. Fortunately, there is a 30-foot-tall net to catch it before it reaches the traffic, potentially breaking a windshield and causing a collision.

The factor that keeps that net up there in the wind, ready to snag a home run, is a contractor who knew how to pay attention to the details. Sports complexes and athletic fields are projects that go beyond simple fences. They use all the familiar tools but stretch the fence-maker’s skills. They can also require the contractor to come in at the beginning of a project rather than the end, work closely with other trades, and play a defining role in creating the site.

Is sports fencing a specialty? That depends on who you talk to.

“SOME EXPERTISE GOES INTO IT.”

Chris Osmer, Vice President of AFA-member company Professional Fence Co., believes that it’s a specialized application of fencing. His company won the 2019 AFA PRO Award in the Commercial Multi-Use category for their work on the Spalding University athletic complex in Louisville, KY.

“I would say that there is some expertise that goes into it. You have to have an understanding of the sport, how it’s played, and how our products are going to interact with the players and the game itself. Once you have that fundamental knowledge, it’s easier to apply fencing knowledge and experience to it.” 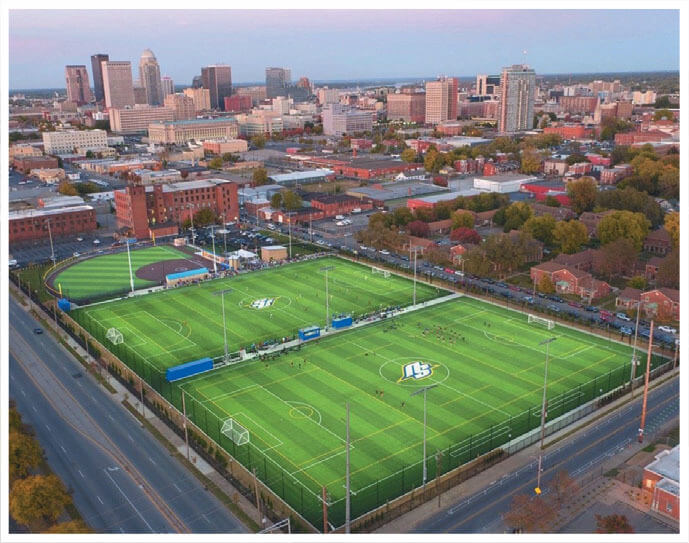 The Spalding University project is a 7.5-acre site in downtown Louisville. Mortised neatly into this rectangle are two soccer fields (which double for lacrosse and field hockey), a softball diamond, batting cages, and a small parking lot. To keep the games from spilling into the surrounding neighborhood, the fields are fenced with 20-foot-tall netting around each soccer area. The softball diamond has an 8-foot tall chain link field fence backed up by 20-foot-tall netting, and a 30-foot-tall net backstop. The netting systems are retractable so they can be removed easily (without a cherry-picker) for off-season storage. Chain link surrounds the pitcher’s bullpen and protects the fronts of the dugouts. The batting tunnels are netting on four sides and the roof. The entire property is bounded by ornamental aluminum fence, including a main gate with brick pillars. Professional Fence installed all of it including the netting systems.

“The unique thing about these athletic complexes,” comments Osmer, “is that we’re generally there from start to finish. We’ve got to help start the project to establish the fields.” This is in contrast to most other jobs where, he says, “we’re the last guys out there.” 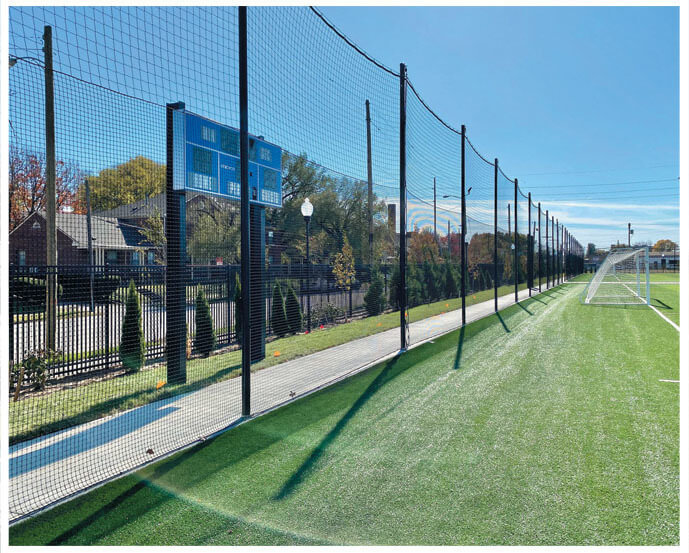 The first installations on the project were the softball field fence posts and the sleeves for the netting posts. “The way that these fields are built with synthetic turf, they pour a concrete curb around the outside, which encases the sleeves that our netting posts slide down into. It’s a similar thing with the chain link fence that goes around the softball fields. So it’s pretty critical that we’re getting the correct fence-line in place and getting the correct elevations, because every other contractor is piggy-backing off our work.”

“In this instance,” adds Osmer, “we did perimeter ornamental fencing around the entire complex as well,” which was one of the last things constructed, “so we were kind of wire to wire on this job.”

Since they were involved virtually throughout the project, they had to coordinate with other contractors to an unusual degree. Because of this, Osmer feels that good collaborative skills are vital to doing sports fence projects. “The most important thing is to be able to work with other contractors on the job, and being able to communicate well with them. Communications are key.”

Professional Fence had done sports complexes before, including tall netting. The only aspect of this project that was new to them was the retractable system. “We’re not scared to try something new,” Osmer explains. “The more you work with new things, the more you learn, the better you get.” His team also installed padding on the low wall at the base of the softball backstop, attached with a velcro-type system so it can be removed to minimize weathering.

As to the installation work, Osmer says, “the most important thing is to not cut corners. It’s easy for people to get out there and get in a rush and skip over minor details, but when you’re working with other contractors and under some unique circumstances, you need to make sure you’re detail-oriented about it.”

“A FENCE IS A FENCE”

Rob Greene, co-founder and president of AFA-member Martin Fence Company, believes that the difference in sports projects is only one of degree. “Many times, it involves taller fences, backstops,” says Greene, “but technically a fence is a fence.” His company has “done our share” of sports projects, although they typically do not do tall netting, which Greene feels is really a specialty of its own. 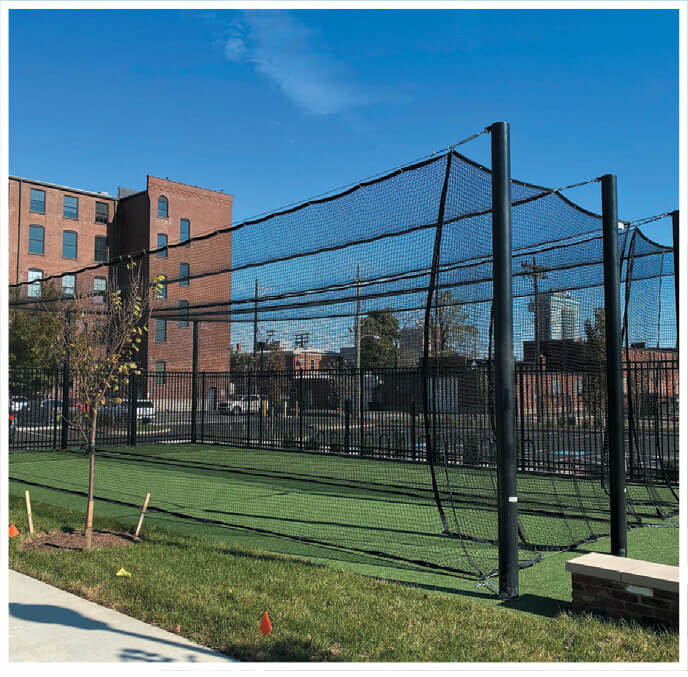 For an experienced fence contractor, the single biggest difference about sports projects is unquestionably the netting systems. Netting installations are on a larger scale than most fences, heavier products that operate under heavier loads. The poles are often 30–50 feet tall. They may be spaced up to 50 feet apart. They are bridged by cables to support the nets, strung under high tension to minimize sag. The netting itself is heavy and, although it appears to be mostly open area, can develop significant wind load.

There are specialists who only do netting installations, some of whom travel the country executing major projects. However, the essential skills are similar to fence work. Moreover, the systems are (usually) designed and engineered for the project, and the contractor is given a set of drawings and specifications to rely on.

Typically, netting hangs on its own set of poles. In situations where there is fence at the bottom of the netting, both can be installed inline on a single set of (really big) poles, but it is more common for them to have separate pole systems.

Horizontal cables are strung between the poles at top and bottom, and sometimes at a middle height as well. There are usually vertical cables along the length of each pole, too. The horizontal cables have to be under high tension to minimize sag, especially since the runs are often quite long. Netting gets clipped to the cables with netting clips or carabiners.

Manufacturers of the netting systems and other specialized sports equipment are generally ready to provide support, too. Larry Ball, Vice President of AFA-member Ball Fabrics, a major netting manufacturer, says that many companies in the industry, including his own, will provide turnkey packages: “Based on what you are trying to accomplish, we will tell you what pole size and spacing and foundations you need, and so forth. Typically, we will recommend what we feel would work best based on the conditions of the project, but if they need engineering, we leave it up to the customer to get a local engineer.” Among other things, a local engineer is better equipped to make the project meet state and local code.

Ball points out that the fence contractor is well-prepared to handle the first phase of a netting project, the posts. “You’re digging holes, pouring concrete foundations, and setting these posts. They may be a heck of a lot bigger than your typical fence post, but it’s still setting of a post.”

The next stage, running the cable, engages more specialized knowledge. “There are tricks to the trade, for example, about how tight do you get it. Some people will use come-a-longs to tighten the cable, and then clamp it off; some use turnbuckles to tighten the cable. There are some guys who like the cleaner look of clamps, but if you use a turnbuckle and two years from now you have a little bit of stretch in that cable and a little bit of sag in that netting, you can tighten up the tension in that turnbuckle and get some of the sag out.”

On the long runs between netting posts, some sag is inevitable, so evening out its effects is an important task. Where the sag is greatest, in the middle of a run, extra net builds up at the bottom. One approach is to roll up the extra around the bottom cable and tie it in place, but “that’s not the best look,” according to Larry Ball. “The way a lot of guys do it for optimum aesthetic effect is to cut the net and re-lace the bottom roping, customizing the height in the field. That’s the only way you can get the look that it was cut perfectly for that job.”

His advice for fence contractors approaching their first netting project is, “First and foremost, make sure you either check with an engineer or get assistance from the netting supplier, but make sure that you use the right size post and foundation. Undersized posts and foundations can end up costing a lot of money.”

In fact, checking with the supplier is advice offered on many sides. Heidi Claeys, National Sales Manager for AFA-member Douglas Industries, the Eldridge, IA-based manufacturer of a wide range of sports equipment, feels that contractors are needlessly put off by the unfamiliarity of some of the materials. Since the spec lays out the tasks, the only real obstacle may be finding the right materials to meet that spec in a market that he’s not familiar with. “I think one of the biggest barriers to fence contractors,” she suggests, “is that they don’t have a good contact to provide what was specified. They might come across a job where they’re only putting up the fence, although there may be a batting tunnel frame and windscreens and other products to install too, but they just pass on it because they don’t know anything about it.” A manufacturer has every incentive to help fill that knowledge gap and make the project work. Claeys sees it as a potential way for the fence contractor to add to his revenue stream. “If they just dove into it, they’d probably realize that everything is laid out that they need to do, and they just need to be willing to jump in and try it.”